Iran has an ancient culture and a great antiquity. In the history of the world›s ancient civilizations, this country has played the most prominent and important role in giving life and flourishing to the people of the world.
Iranians has had a positive and significant view of woman in most time periods in history, especially in ancient times, when they considered her a holy, pure being and respected her status.
In Persian, the word «woman» has its roots in «zadan» and «Ezaf-e shodan», meaning to give life and to be live.
Throughout history, women have been respected and valued and sometimes they have been oppressed and victimized as well. In ancient Iran, woman, as was believed to be one of the most civilized creatures in the world, had been considered to have an elevated character and an honorable position.
Being different from Arabs who thought of woman as a disgrace and the Greeks who considered her to be the embodiment of men’s lust and pleasure, Iranians
acknowledged her a sacred and a pure being whose respected presence is a MUST for life.
One of the signs of Cyrus’s majesty and grandeur is the compilation of the first human rights charter now available in the British Museum. This charter is a proof of gender equality, as Cyrus paid special attention to the status and character of women as the educators of the next generation.
It is safe to say that in pre-Islam Iran and specifically in the Sassanid era, women had a very high position and were considered as important members of society to the extent that they had a voice in various issues and sometimes appeared to be in the decision-making position. A number of the Persian kings were women, among them was «Azar Midokht», the daughter of Khosrow Parviz. This shows that during this period men and women had equal rights in all matters.
Women had such a value and personality in ancient Iran that they even had their say among religions and were considered great and praiseworthy, as in the Zoroastrianism one day of the year was denominated as Women’s Day.

On the fifth day of Espandarmad (the last month of the year), the people of Iran used to hold a celebration and call it Eid-e-Zan (meaning Woman’s feast ). On this day, it was customary for men to give valuable gifts to their wives. This culture was symbol of appreciation of women’s efforts.
Throughout history, human beings have always sought a more evolved model than themselves to make their way of life similar to that of the model. This model has sometimes found a special place in the beliefs of people as myths which show the cultural identity of a nation.
Sometimes these myths have found their way into the heart of a nation that have gradually become great Gods and have been praised and worshiped.
One of these myths, which has reached the level of being a goddess and is of great importance in ancient Iran, is called «Nahid», the goddess of women.
Nahid, as the goddess of pre-Islamic women, was a female god who was believed to be the supervisor of all women’s actions and behavior, become
angry or pleased with them and help them when needed.
Iranians built temples for this goddess, made her statues and placed them inside the temples as a symbol, an example of which is in «sarab» a village
in the city of Kermanshah. This goddess is called the mother goddess.
Based on Iranians beliefs, Nahid is the god of purity, innocence and the goddess of pregnancy who comes to the aid of women during childbirth. Nahid is also praiseworthy in the eyes of Iranian men since this goddess, as a model of Iranian women, has purity and chastity and an elevated personality full of dignity and sobriety and loves infallibility. 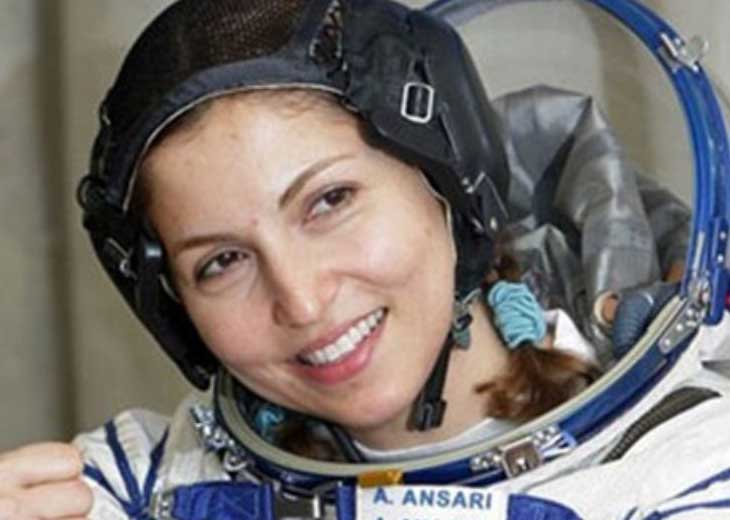 Persian Women,From Nahid on earth to Anousheh in space

After this period, up until the end of Qajar era, there was no trace of women and women’s rights and freedom. Although prominent women sometimes contributed significantly and made history but this was not a general trend.
It should be acknowledged that Iranian women had an active role in events such as the tobacco protest and the Persian constitutional revolution in late Qajar period, but this presence was nothing more than a spark and did not result in a positive outcome that facilitates the provision of their basic rights to enter the context of developments.
In the Pahlavi era, the slogan of women’s liberation became the focus of politics, and women were able to enjoy certain rights, but in practice they were still on the sidelines. During this period, the presence of women was not strong, and in fact they had not an audible voice.
With the beginning of Pahlavi reign, although democratic institutions were not allowed to engage in political activities, but a number of reforming events took place in the personal and social life of Iranian women and as a result shed some light on social demands. In this era, the crisis of women’s rights, which had been hidden for
generations, became an important issue in its fanatic form. This was for the first time that confrontation between modernism and traditionalism with the issue of women’s rights in focus arouse and Iranian women became a living diagram of this confrontation.
Despite such a background, women appeared actively during the Islamic Revolution of 1978 and showed their hidden and potential power to participate in the developments of the revolution. This contribution was such a significant one that if we eliminate women from the grounds of the Islamic revolution victory, other factors will not be as effective. Furthermore, Imam Khomeini had constantly highlighted the importance of this stratum of society.
The role of women in the victory of the revolution and after that in eight years of imposed war with Iraq is undeniable. This time, the Iranian woman had two goals by appearing on the forefront of the revolution: first protesting the status quo and second demanding a fundamental change in the way society views women.

The role of women should not be overlooked in the process of contemporary developments. Today, women’s empowerment and efficiency go hand in hand with men’s and perhaps they take the lead. Women have awareness of their rights; However, there is still a long way ahead to get to that desired result.
However, it must be admitted that the issue of women and their legal liberations is one of the special phenomena of the current era, and this movement has emerged as a social movement in European societies since the nineteenth century.
Although today’s extremist versions of this movement have shown themselves in the form of feminism, the true women’s liberation movement has humane and justice-oriented themes. Today, the issue of women’s freedom, as well as political participation and freedom of expression, is one of the important challenges between religious thoughts and human schools.
In post-revolutionary Iran, many efforts were made to create a better position for women. Anousheh Ansari, an Iranian woman, went into space and Maryam Mirzakhani won the world’s greatest mathematician award. They even have been able to take on some of the key positions in society, such as the vice president of the country. By doing so, the Iranian woman was able to show her abilities in society and proved that the issue of women’s political activity from the Islamic point of view does not contradict the modernization of contemporary Islamic thought and that the survival of the Islamic Ummah from current crisis is possible only with women’s active participation in reformation and development.
The active presence of Iranian women in various fields has invalidated reactionary ideas, showing that Islam, and in particular Shia jurisprudence (Figh), is the best supporter of women’s rights. Therefore, it should be said that women’s participation in society actually requires a new understanding of the existing realities.